Step Back In Time: A Wedding Story Of Yesteryear

10.07.20
Wedding Planning Wisdom What Marriage Means To Me Wisdom 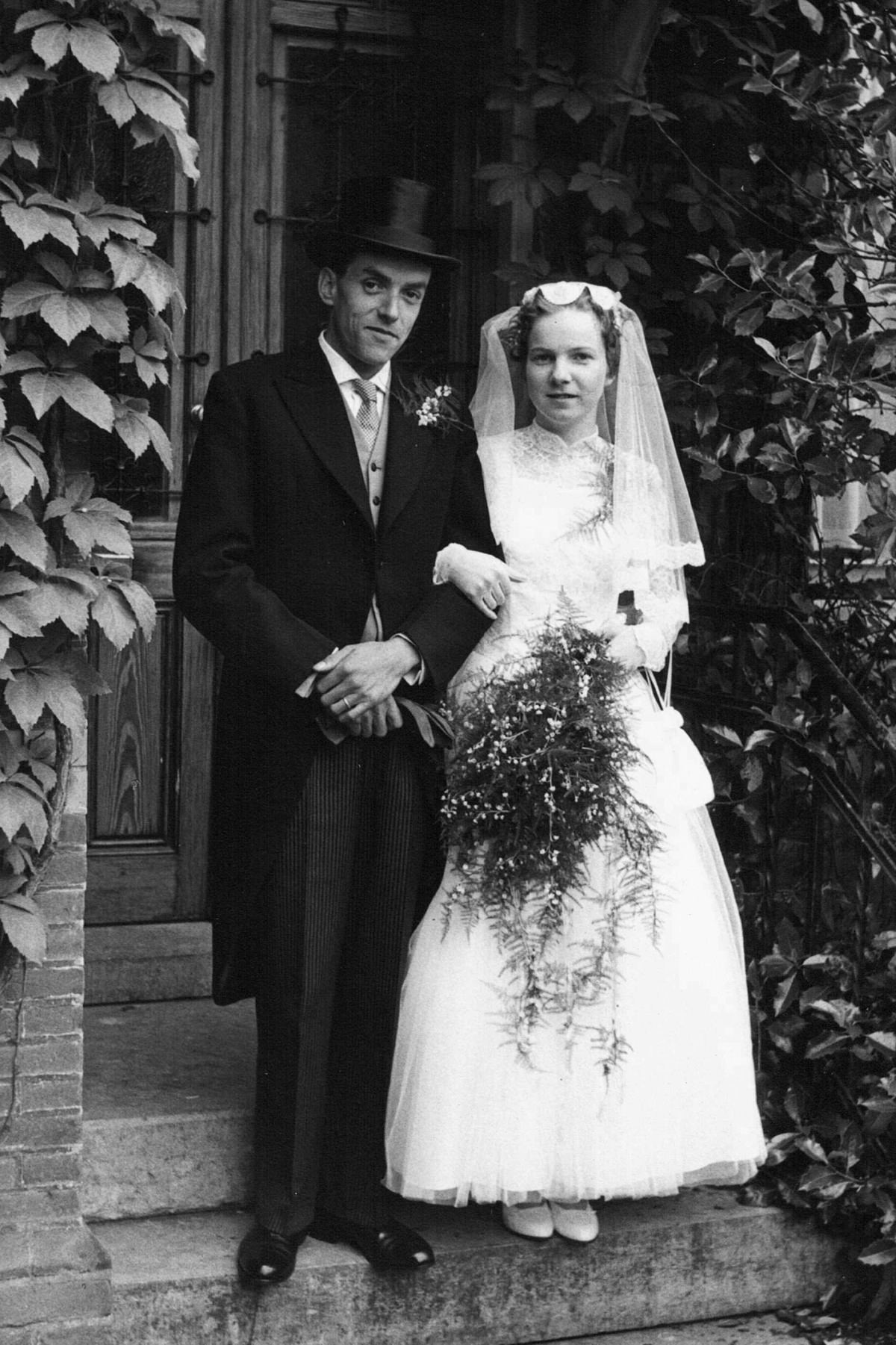 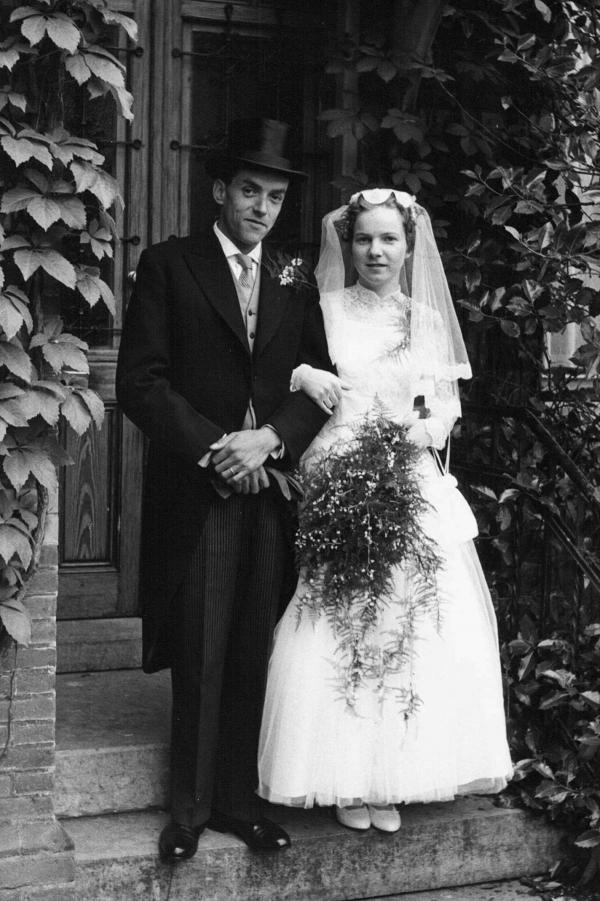 The Vintage Issue is not just about style and fashion, it’s also about honouring memories and taking inspiration from weddings past. Today, we are delighted to hand things over to Sarah of de lumière photography, who has generously sat down to share the story of her in-laws, Maria and Albert.

Maria and Albert were both born in Holland and grew up during World War II. Maria remembers having no food and having to eat Tulip Bulb soup, and having German Tanks rolling down the streets.

The village that Maria grew up in was Rijnsburg on the coast. It was predominantly Protestant and as they were Catholic she had to walk to the next village, Katwijk, each day for school.

Maria and Bert met at an evening of dancing – a regular social event in one of the nearby village halls. Maria was just 19 and Bert was 24. Bert grew up in Zoeterwoude, an inland village. When he and Maria met, he was living in a single room in his brother’s home as both parents had passed away.

Bert wanted to escape the cramped conditions in the home, and so Maria suggested that they move away together. There were no homes in Holland available (due to the recent war) and so they looked abroad for ideas. Maria’s sister had immigrated to Australia so they made the decision to join her.

They had to get married before they left, so quickly organised a wedding at Maria’s Catholic Church where Maria attended school and received her confirmation. Their engagement party was held over a couple of hours in Maria’s family home in Rijnsberg where her father was a blacksmith. It was an open house affair where family and friends dropped in to congratulate the couple. 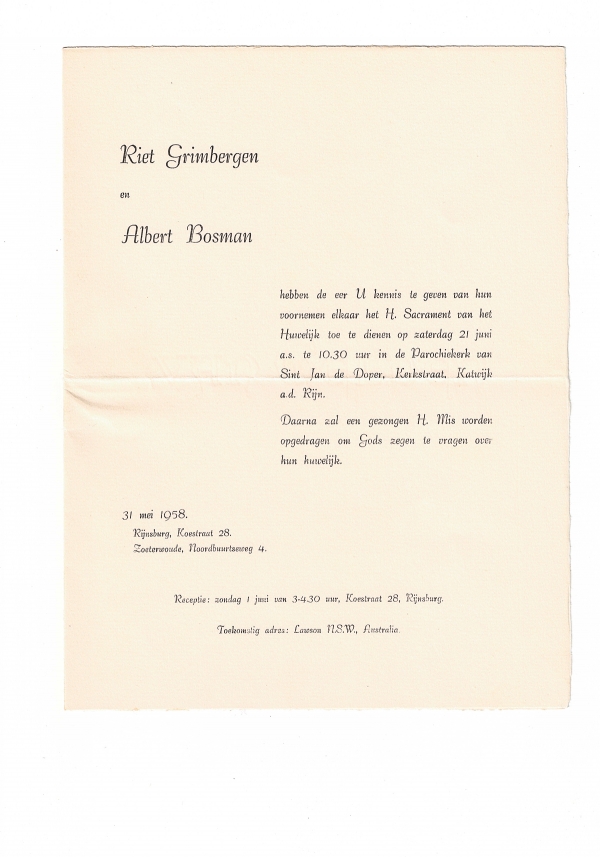 They completed the legal registry marriage on the March 18, 1958 and scheduled their religious ceremony for the June 21, 1958, literally days before they left for Australia! In accordance with their religion, they did not live together as husband and wife until after the religious ceremony even though they were legally married. 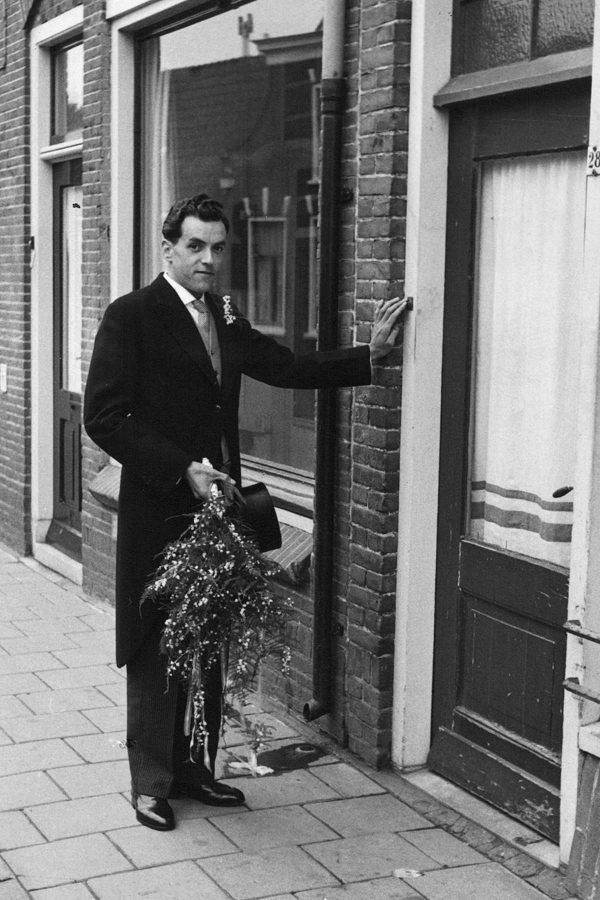 On the day they married, Bert dressed in his hired tuxedo and top hat, gathered up his gift to Maria (a bouquet of stephanotis and lilies of the valley), and the car he hired took him to Maria’s home. Maria had made her own dress and veil, and both looked very happy as they left to go to the church in Katwijk.

Bert and Maria entered the church together with family and friends falling in behind them.

After a formal Catholic Mass, Bert and Maria, along with their guests, retired to the hall for a late breakfast as there had been no time before the 10.30am ceremony to eat.

Maria and Bert played games, talked and ate, with lunch also being served. The day was filled by different family members entertaining the couple, like singing, or sketches, Maria’s sister Jopie had made up a story with photos about our lives. The official photographer had left at the beginning of the breakfast and returned after lunch with all the proofs of the photos so that the happy couple could pour over them with their guests before they left on their honeymoon. 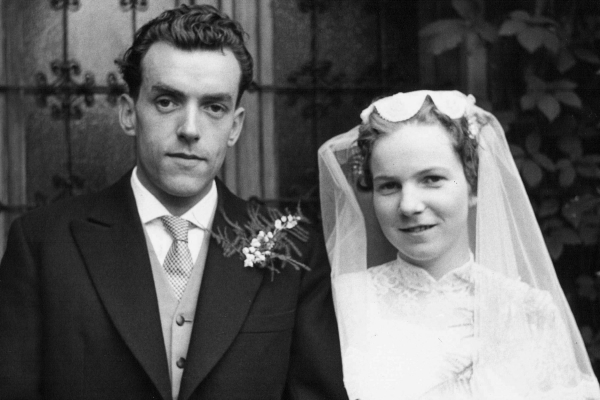 An interesting thing to note is that Bert organised most of the details of the wedding (car, bouquet, tux hire and photographer), while Maria’s mother organised the food at the reception.

Their entertainment at the reception was a record player!

After the reception ended and they said goodbye to their guests, Maria and Bert were invited to visit The Hague by her godparents for their honeymoon. They were quite wealthy and took the couple out for dinner at fancy restaurants and attended museums and plays together.

Merely days after their wedding day, Maria and Bert boarded the Wasserman in Rotterdam for a one month trip across the ocean to Fremantle, Australia. The ‘Waterman’(Wasserman) was really a cargo ship, which they had converted as a passenger ship, first to bring troops to and back from Indonesia during and after their war of independence. Later, it was used as a migrant ship. They were both allocated a cabin, but Maria shared with five other girls and Bert with five other men. The cabins were really cramped. Maria had a top bunk. Apart from the 3 X 2 bunks and a little wash basin, there was not much room to move. Bathrooms were shared by quite a few people! 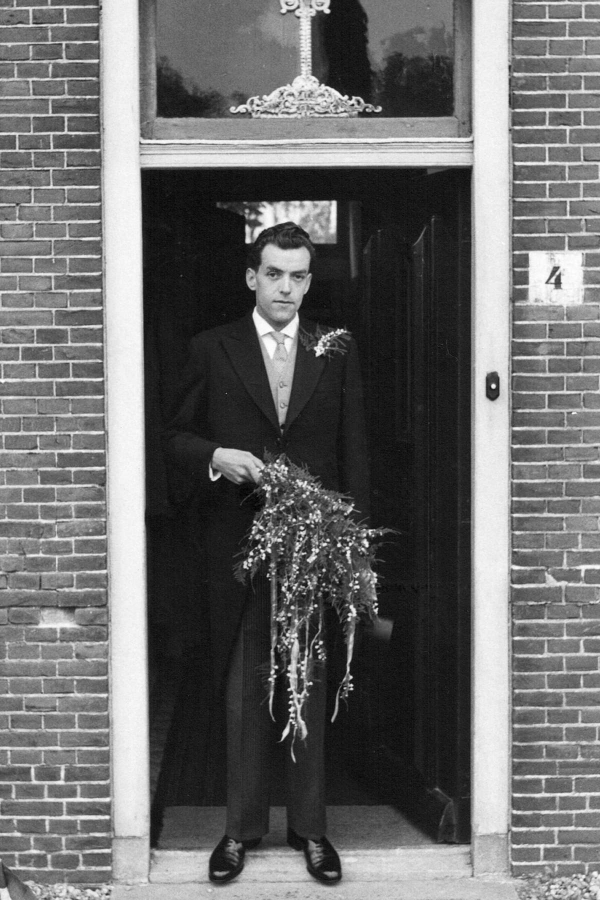 The first few days on board were lovely, but as soon as they hit the Bay of Biscay the trouble started. As the ship was very high on the water, it rolled on the sea. All loose furniture was tied together every time they were on rough seas which was often! Maria was very seasick in the Bay of Biscay. They had told Maria to stay outside on deck. It was cold and wet and she stuck it out for awhile. In the end, she went to her cabin and found out that when she laid down she did not feel sick at all! In the Mediterranean Sea things were better for a while; they enjoyed that.

After arriving at Fremantle they were allowed to go on land for the day. They took the train to Perth and had a look around there. Then over to Melbourne. In Melbourne they took a bus trip into the Dandenongs, that was beautiful. Then they were on their way again, the last part of their journey! They sailed into Sydney on a fine July morning. Their first view of the harbour and it was breathtaking! The harbour bridge and the foreshores. They sailed under the bridge and finally docked.

They were met by their brother-in-law and travelled up to Lawson in the Blue Mountains to stay with Maria’s sister until they found alternate accomodation. Bert was a builder by trade and found work through his brother-in-law. It wasn’t long before a home was available in North Narrabeen where they stayed for two years, with their first son being born while they were there. They had two more sons, born once they moved to the mountains. 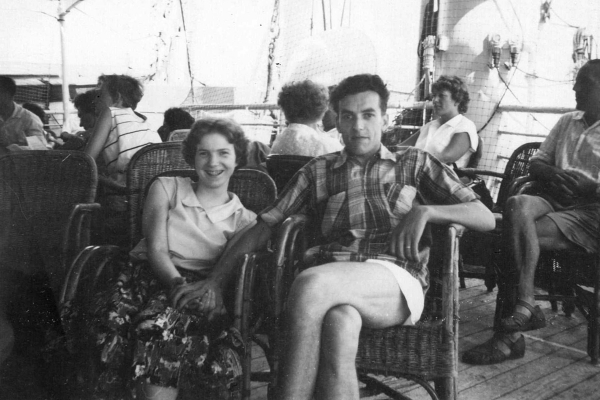 Maria and Bert had fallen in love with the Blue Mountains and bought a cottage on the Great Western Highway in Lawson, which Bert spent some time doing up before they moved in in January of 1960. They bought their first car in 1967, a VW beetle! They stayed in the house on the highway until 1980 when they bought a block of land (still in Lawson) where they built their home. Maria still lives in this home, Bert having passed away about 10 years ago. The gorgeous old house on the highway was knocked down when the new highway went through, but a persimmon tree still stands where the yard used to be.

Maria and Bert only returned to Holland one time after they left (family visited them in Australia regularly, though) and noted on returning that they were glad to live in such a gorgeous country as Australia. 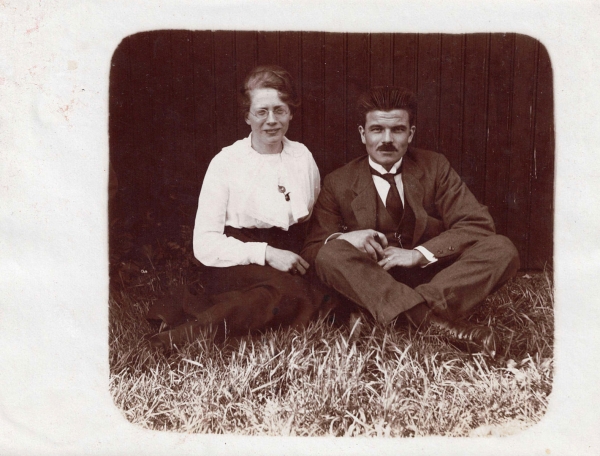 Pictured (above & below) Maria’s parents Gerandus Leonaardus Aloysius Grimbergen (what a name!) and Maria Josephina Caspess on their engagement and subsequent wedding day on the 9th July 1924. 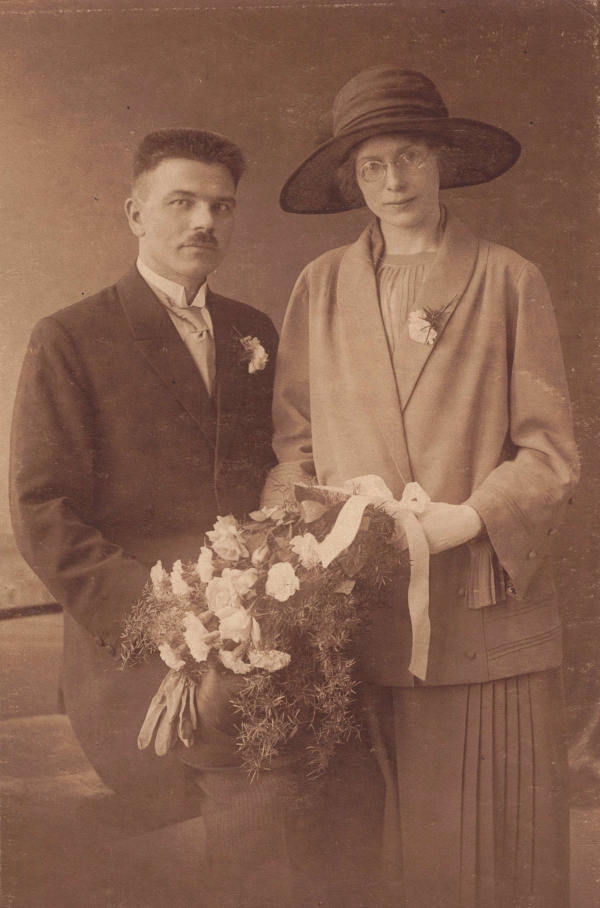 Ms Floral Says: Thank you Sarah for sharing this piece of family history – such a fascinating read and hearing all about Maria and Bert’s wedding details and journey afterwards was an absolute treat!

Making moments, preserving them in time, telling the stories and honouring what has been. Celebrate all that memories bring to our lives.