Debra and Nelson’s big day is all about classic elegance. Picking an all-white colour palette, a traditional church ceremony and a black-tie dress code, these two wanted the focus of their day to be utterly romantic.

Inviting Will Chao Photography along to capture it all, this is a day that shows the very best of Melbourne’s idyllic location when it comes to weddings

Debra and Nelson were on seperate holidays in Thailand when they met, tells the bride. “We were both on separate holidays in Thailand – we met while partying at the Full Moon Party! Nelson was from Melbourne and I was from Sydney so after we met and started dating we did it long distance for about a year before moving to Canada for a couple of years then back to Melbourne and now we are in Sydney.”

And it seems these have all their momentous moments happen while on holiday because it was on another trip, this time while the couple (this time together!) were on a  trip throughout Vietnam and Cambodia. Nelson sharing the story of how he found just the right moment to ask. “When I decided to propose we were already planning to go on a holiday in Vietnam and Cambodia. I tried to organise the proposal while in Melbourne, however trying to co-ordinate the perfect proposal from overseas proved difficult. By the time we started the trip, I had shortlisted a few options but didn’t have anything locked in and had to resort to winging it while we were on holidays, hoping for the best. After 2 weeks of travelling and nervously carrying the ring around with me, we were close to the end of the trip and none of the options had worked out so far. We woke up early to watch the sunrise at Angkor Wat Temple in Cambodia and it was at this point I decided this would be the perfect spot.
We returned later that day with a private tour guide, where I was able to pull him aside privately and let him know about the proposal. He helped me to find the perfect place away from the crowds and with the perfect backdrop, where I asked him to take our photo.
It was at this point when I got down on one knee and proposed to Debra – we were lucky to have the moment all caught on camera by our awesome tour guide.”

The groom found his dapper black and white tuxedo from Institchu.

The bride worked with Corston Couture to create a stunning, custom wedding gown.  She tells “When I went there initially I had listed the dresses that I wanted to try on and Coral, the designer of Corston Couture, happily pulled out those dresses for me to try on but she also gave me a couple that she thought would suit me – she has an eye for it because the dress I ended up choosing was one that she insisted I try on! I always wanted a dress that was unique. I loved the detail on the dress as well as all of the 3D flowers on the dress. Coral changed the design slightly to suit my petite frame and it was just perfect!”

“It sounds cliche but the whole day was amazing!”says Debra.

The couple chose a simple colour palette for their day, working with Levian Events to create arrangements of simply white blooms. Debra explaining “We wanted a romantic/timeless/classic feel to the wedding so we decided to have white flowers with a touch of greenery for the bouquets, flowers on the cake and all of the florals throughout the venue.”

Once the sunset, guests were invited to gather for a sit-down reception at Cargo Hall, which the couple chose for its industrial vibes and central location. Debra sharing “We had half of our guests flying from interstate or overseas so we wanted a venue that was central for our guests and one that showcased the beautiful city of Melbourne. Cargo Hall had amazing views of the city skyline and the Yarra River and we also loved the fact that while it had some great features such as the high ceilings and beautiful wooden floors, it was also a blank canvas where we were able to put our own personal touch when styling the venue. We also had the absolute best wedding producer (Gavin) who was so helpful and lovely to deal with – as soon as we met him we knew would be in good hands.

On our wedding day, we got so many compliments on how beautiful the venue looked, how yummy the food was and how great the service of all of the staff on the night so we made the right decision having it at Cargo Hall!!”

The all-white vibe continued throughout the reception, Debra and Nelson choosing white linens and white chairs, sparkling chandeliers – a nod to Debra’s love of them!

The newlyweds entered their reception to the sound of drumming, thanks to Zaffet Royale.  “The Lebanese drums that we had during our entrance was so much fun” reminisces the bride.

“The speeches, first dance and the father-daughter dance were emotional but such a special part of the night.”

The newlyweds took to the dance floor for their debut to the sounds of Premium Event DJs.

The below wedding vendors made this magic happen and are an approved part of the Polka Dot Directory. Visit their portfolios to learn more and enquire about their services! 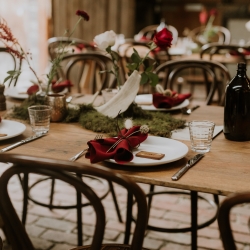