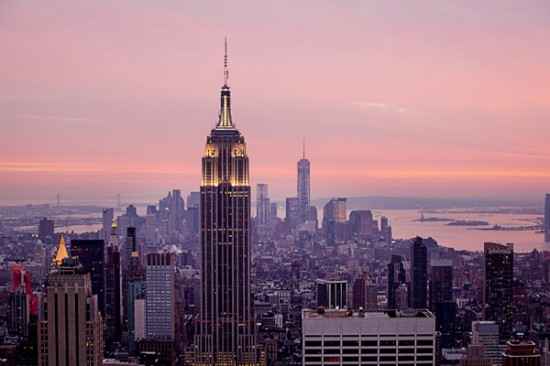 “Quick, sweetie wake up… it’s snowing!!”  I screamed with delight, as I woke Dan filled with enchantment of a white Christmas in New York.

It was six months after returning from our blissful honeymoon in Bali that we found ourselves on part II of our honeymoon, this time a winter honeymoon in New York, colder than we had ever been before in our lives, prepped with a ‘to- do’ list but ready to lose ourselves in the magic of this city. We had done a lot of pre-reading and planning of things we absolutely wanted to do while we were there, but the great thing was that we had three weeks over Christmas and new year to submerse ourselves in the New York lifestyle. What we were most taken with almost right away was the festive spirit, the smell of fresh pine, the streets lined with fairy lights and doors adorned with wreaths which created an anticipation and sense of wonder as to what the festive season would bring. Our home away from home was the Midtown Holiday Inn which is located in the Hell’s Kitchen district, and a short walk to Central Park and Times Square, so the perfect base for our New York adventures. Before we left I had already organised to meet a local photographer for a lifestyle session. I really wanted to be able to look back on our trip and have some beautiful photographs of Dan and I, to our remember our trip together and I wanted someone who would be able to capture ‘us’ just being ‘us’ in New York and not just a whole bunch of selfies or photos with one but not the other.

When I contacted Cassidy Parker-Smith, we instantly hit it off, and her infectious enthusiasm had me so very excited. I chose Cassidy after falling in love with her style. I loved the way she crops moments and the honesty she captures from the people in her images. Cassidy also went above and beyond, offering us advise on things to see and do in New York to ensure we had the best stay possible. Before the shoot Dan and I decided we would leave an item out of our to do list and save it for the day of the shoot. This ended up being the iconic Brooklyn Bridge. Friends of ours mentioned that we should take a love lock to put on the bridge, which we did and Cassidy so eloquently captured the moment. These are some of my favourite photos. I recently spent the good part of a weekend designing an album to both include our photographs from New York as well as Cassidy’s images. It has ended up being a two volume, 400 odd page catalogue of stories. I wish I could explain the wonderment of reviewing  all the images in a tangible product oozing with love, excitement and the enchantment of all that is New York. Ms Zigzag says: This article was originally published in May 2014, however considering it is winter in NYC right now and the festive season is well underway, I thought this would be great inspiration to share with couples heading over to NYC for a winter wonderland honeymoon. Brrr, rug up!

Kate says: “I’m Kate, a photographer living in Brisbane, seeking and photographing people; documenting stories through images. Each picture I take is a piece of my heart; just how I see yours, as I see your story unfolding, piece by piece, frame by frame.”