This relaxed Queens Park garden engagement shoot for Chris and Todd was all about capturing the genuine love they have between themselves. The couple are on the brink of adopting a child and having been engaged for five years, wanted photographs that captured their relationship as it is now. They chose photographer Willow Branch Photography to capture this very special time in their lives.

Chris tells the story of how he and Todd met “I was doing contract work for an interstate marketing company for a website and was asked to find some young attractive guys that would be willing to head out into Fortitude Valley nightclubs with me to do promotions for the website.

Todd didn’t even have a clear photo on his profile, yet I sent him a request to chat including my phone number if he was interested. He let me know that he wasn’t up for doing the promotion work but was up for a new mate if I was willing to hang out. I headed over to hang out with him and from the moment I met him I felt like we had been best friends for years. We hit it off and everything just felt natural from that moment onward.”

On what they love about one another, Chris explains “Honestly, there isn’t anything in particular that we love about each other as we can drive each other up the wall, but the one thing we have both truly realised and understand is how another person can make you simply feel “complete”. This sounds more dramatic than I would have believed from someone else, but a fortnight ago I spent a week in our home alone while Todd visited his family in New Zealand and I can honestly say I haven’t felt that lonely in years.”

Chris remembers “A good example of the dynamics Todd had established within my family, shown perfectly by the status I entered into Facebook on our six year anniversary with the immediate reply from my sister…

Chris Kinsey-Manning: “Today marks six long and grueling (I mean amazing) years since I decided to give my man Todd a chance at being my boyfriend and I gotta say he has stood up to the opportunity pretty darn well… I love you loads bubbles and I can’t wait to call you my husband and finally get our family started!”

Nikki Manning:  “Glad to have you as my brother Todd, you’re my favourite!” ”

Chris recounts the proposal story “I took Todd on a surprise skiing holiday to Perisher and had the engagement ring hidden within a Styrofoam ball that I covered in snow and threw at him; I then “argued” with him to open it and look inside.”

“Our wedding is set for the day that Australia catches up to the rest of the world with marriage equality and when we can each decide which X-men mutant we are each choosing as our own classy-but-unique point of feature with our tuxedos. (Also, if our child is born before that day happens, they have to look pretty damn awesome on the day too!) ” 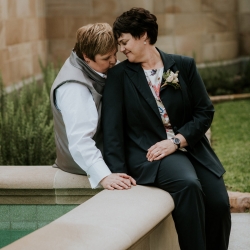