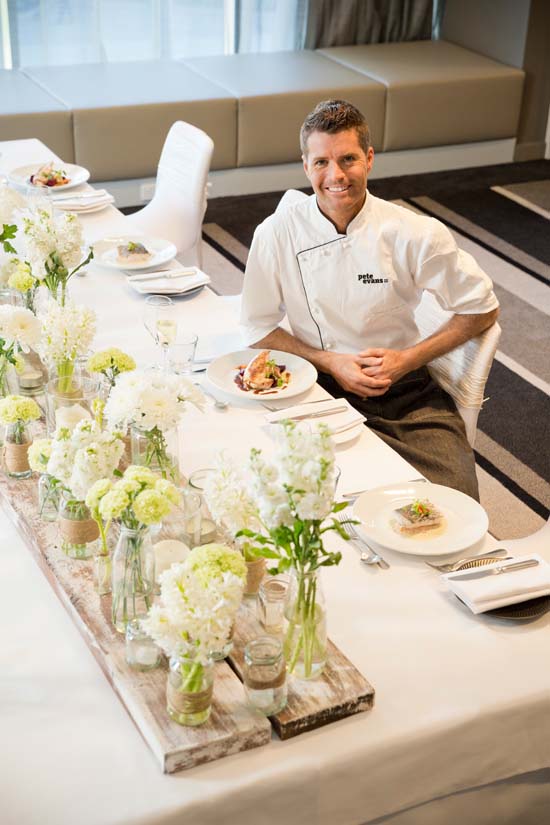 Recently I had the opportunity to sit down with celebrity chef Pete Evans, and pick his brain about his new partnership with Fraser Suites in Perth and his fresh approach to their wedding and events menu.

The My Kitchen Rules judge and paleo chef has taken up the role of consultant chef and chief menu designer across all aspects of dining at the gorgeous hotel, designing a range of new menus officially launched on 29 June at its inaugural Wedding Showcase. I was lucky enough to attend this lovely event, which saw Evans presenting some of his signature dishes from the menu live for the guests, and also taste some of the new menu before its launch. Some of the largest and freshest kind prawns I’ve ever had the delight to eat!

“The menus are about well sourced food from the land and sea simply prepared for maximum nourishment” said Pete Evans.

The range of menus will feature seasonal, organic and local produce where possible, with raw food and paleo menu options also on offer. I asked Evans how his relationship with Fraser Suites Perth came about, and it was a remarkably natural merger: Evans had stayed at Frasers during the filming of My Kitchen Rules, had admired the property and approached management himself to discuss the possibility of working with them on their menus.

“A year later and here we are with a finished menu”.

Evans’ first business was a catering business, and it was, he admits “his baby”.  Whether it be a Wedding, special events or a corporate launch – he believes that the food should be memorable, and compliment the quality of the event. He wanted to create a menu that “satisfied” guests, but also drew on his health coach background to bring an alternative healthy option menu for couples wanting something different for their big day. Whether that be a paleo menu, or a raw vegan spread – Fraser Suites can now offer this, in a world class setting.

Some of the old favourites are represented in the menu, but with a raw or paleo twist. The Raw Cheesecake for example (with no cheese or dairy) and the Chocolate Mousse (raw cacao and avocado) would look and taste pretty familiar to most folk, but are a great testament to the process of trail and error to re-create popular items and presenting a healthy option without alienating guests. As a cheeky end to our chat, since I knew that Evans and his lovely fiance Nicola Robinson were recently engaged, I asked about his thoughts for their wedding, and how he would be incorporating his paleo lifestyle into the event.

“Neither of us is very traditional… I think we’ll be catching our own meal, somewhere around the world.”