My wife Lee and I met in the photo pits of Brisbane’s live music scene. Years later I would propose, and we would marry on the other side of the world in Norway.

‘Take You On A Cruise’ by Interpol had always been one of our favorite pieces of modern music. As we discussed what we both wanted from our wedding, it became clear that we wanted something that would bind us together as a couple, something simple and humble. We didn’t go on a cruise, but we did decide on Norway, referenced by the song. We made a decision that no one would be invited, which was received with mixed feelings! We wanted to avoid the social protocols of inviting hundreds of people, especially those that didn’t play a big part in our lives. Thankfully, with a few tears here and there, our immediate families could not have been more supportive.

Norway is a place of immense natural beauty with amazing sights, such as that of Lysefjord from Pulpit Rock – A natural viewing platform created 600 meters above the waters below when the adjacent cliff face fell away thousands of years ago. We would have loved to get married with this natural beauty as a backdrop, but given the prevalence of religion in the country, and the isolation of some of the regional towns, it was much easier to go with a church.

There were some difficulties in acquiring all the paperwork required to formalize the wedding, and even then there was an element of ‘I hope everything is ok when we get there’. The forms we gathered in Australia, primarily outlined our ability to be legally wed in our own country. Norwegian forms were also required… in Norwegian. We got through it though, largely thanks to Lee who took on these official duties as I applied myself more to the venue, accommodations, car hire and other travel plans.

We traveled through Oslo, Bergen, Stavanger, Hardanger, Aurlands and Briksdal before arriving at the town that would set the scene for our wedding day, Geiranger.

We were fortunate enough to meet with the Pastor Morten to give us a run through the ceremony at Geiranger Kyrke (Church). He put us at great ease and although we didn’t know him well, we could tell he was a kind-hearted man. Fortunately his English was excellent, having practiced in the United States of America for 10 years prior to returning home to Norway.

We stayed at Union Hotel in a beautiful modern room, and used it as our base for four days. On the day of our wedding I had a nice sleep in, and Lee put on her makeup and did her hair in the bathroom. When she was done, it was the first time I had properly seen the wedding dress. It was beautiful, especially on her. You wouldn’t believe that she bought it for only 80 dollars on ebay! I wouldn’t have cared how much she spent personally, so long as she was happy. She also wore shoes from Wittner and our rings came from Blue Nile.

I wore a shirt from Original Penguin and a jacket from NAU. Our emphasis was on clothing that we could potentially wear later (at least that’s what I was told!) and that would pack easily.

We walked down the road to Geiranger Kyrke together hand in hand for our wedding day. The ceremony was attended by the organist, who played a Norwegian wedding entrance, and a grandmother with her two grand children who were required as a witness. After the ceremony Morten gave us a book of his photography, knowing we were both keen on photographing the beauty of Norway, which was a touching gift. After the emotional roller coaster and saying ‘I will’ instead of our traditional ‘I do’, we took some photos around the church, called friends at home from the hotel, and ended our day with a wedding dinner for two at Brasserie Posten.

As a wedding photographer it was always going to be difficult to find someone to photograph our wedding, especially in such a remote location. Rather than photographing the full day (which would have been nice), we concentrated on some key shots. These were taken on a tripod with shutter release. For the photos at Flydalsjuvet, a famous Norwegian photo spot, the camera was camped precariously close to a cliff face – much like we were. It was a little nerve racking on both accounts. I used the shrubs in the shot to cover our hiking boots, which we both changed into for safety.

For those thinking about a destination wedding, either by yourselves or with a small contingent, my advice would be to do so. Your wedding day is completely about you and your partner, and should be as unique as you both. Lee and I both feel that our wedding was the perfect day for us both.

Ms Gingham says: Such a unique celebration and so true to who Matt and Lee are. Congratulations on a beautiful wedding guys!

About Matt and York St Creative: We’re a little bit different, like you. We want to collaborate with you to tell incredible visual stories, and your wedding is the best story of all. 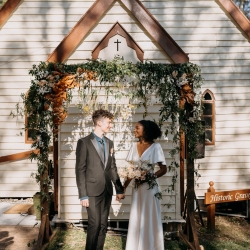