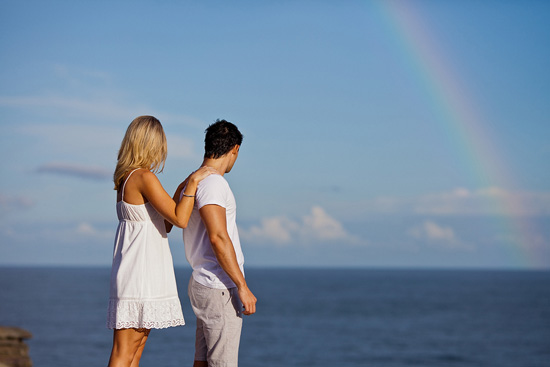 The clifftops of Sydney are always such a spectacular backdrop to photographs, so when David Campbell sent this engagement portrait session my way I wanted to share it! The photos were taken on Maroubra Beach and its surrounding headlands in Sydney and did Mother Nature put on a show with the crystal blue skies and even a rainbow!

Jess and Robbie tell their story. “We first met as friends at 18, and eventually wound up dating and falling in love, but we felt too young to be too serious. Jessica was traveling around the world dancing for a living, while Robbie was at university studying in Sydney. We made a pact then, that no matter what happened that when Jessica was 25, Robbie would hunt her down and propose and they would set up a life together. Robbie never had to hunt Jessica down but, ’cause the couple stayed together and continued to grow stronger and stronger as time went on.” “Jessica turned 25 and after dating all those years, she asked Robbie about the proposal pact….he replied “You’re 25 for a whole year”.” “After seven years together, a tropical overseas holiday and Jessica’s 26th Birthday approaching the day after returning, she was certain he would propose on the trip, but Robbie had other plans. That would have been too obvious. On Jessica’s 26th birthday, Robbie organised to take her on a picnic to the couples ‘special spot’ on a secluded island in Sydney where they would enjoy some sunshine, champagne and good food together. It was here that Robbie surprised Jessica by getting down on one knee and proposing. Through tears and smiles, Jessica said “Yes” and the couple were finally engaged… just hours before Jessica officially turned 26. Following the picnic Robbie had organised a night to remember, dining at ARIA and staying the night in a suite at the Shangri La.” “Jessica and Robbie are getting married in 2013 at Sergeants Mess in Sydney and have their wedding plans well underway, and are looking forward to their big day, and then starting married life on their honeymoon in the Maldives.” Get hitched over the ditch!

New Zealand is full of magic all year round. From idyllic mountains to mist-field fjords, golden beaches and breathtaking lakes.

Destination wedding? Honeymoon? We have all the deets. 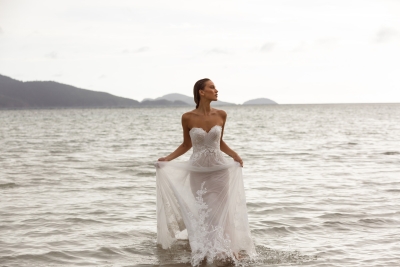 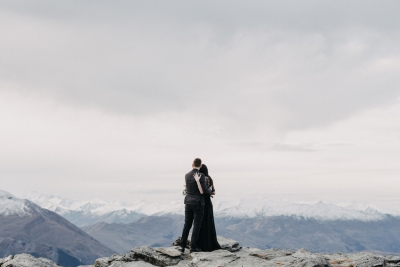 Polka Dot You
New Zealand & Cultural Weddings From The Polka Dot Past!
I am personally extremely excited for this month’s issue at Polka Dot Wedding. A long-time fan of the stunning landscape, […]
READ MORE 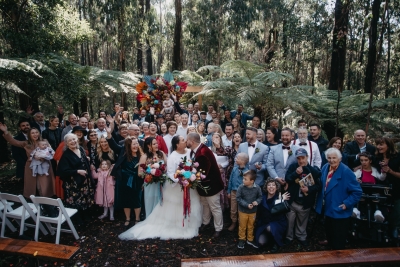 Polka Dot Wisdom
Why You Should Book A Wedding Venue That Can Accommodate Your Guests Overnight!
With interstate & international traveling now open across the world, we can once again welcome our loved ones from far […]
READ MORE 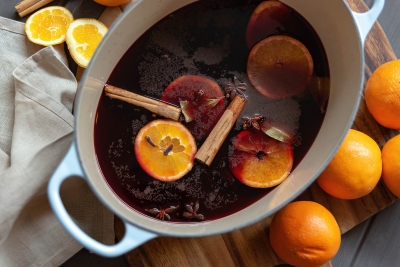 Polka Dot Made
Cocktail Friday – Mulled Wine
One of the things that is most wonderful about a winter’s wedding, are all the little treats and tricks you […]
READ MORE 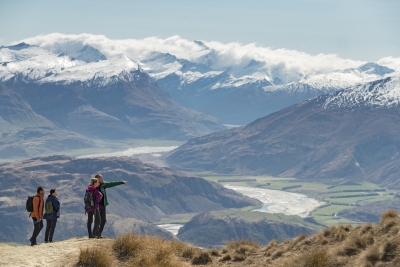 Polka Dot Honeymoons
How To Have An Adventure Honeymoon In New Zealand!
As someone who has ventured onto the glorious shores of New Zealand multiple times, and has myself experienced some NZ […]
READ MORE

This story also features the following wedding vendors.
If you've been featured below, we'd love to get to know you. Click here to join Polka Dot Wedding.
Photographer
David Campbell Imagery