A simply lovely wedding from the talented Adrian Tuazon today! It’s beautifully simple but has a sense of beautiful glamour! The Melbourne wedding took place Heritage Oak tree at the Abbotsford Convent, followed by the reception at Matteo’s.

Ju Lee tells the story of how she met Marcus. “We met about 12 years ago back in Malaysia at a school event. We came to Melbourne to study and after we graduated, we decided to stay here together. In 2008, I went to Dublin for 6 months by myself, for work. Marcus came to visit me in Dublin for a month. We travelled Europe together and he proposed in Venice.”

Ju Lee says little pooch Emmett made a statement at the rehearsal. “During rehearsal, the 5-year-old kid let go (of the lead) of the dog. So we had a dog running away from the oak tree, the kid running the complete opposite direction and the mother of the kid chasing both her son and my dog. However on the wedding day itself, both (the kid and the dog) were so well behaved, I was pleasantly surprised!”

Ju Lee wore a strapless ivory silk duchess satin gown. Inspired by a Jlm Couture gown, it was made by Marcus’s mother in Malaysia who also made Ju Lee’s red Thai silk and lace cheongsam for the tea ceremony and the bridesmaids gowns. Ju lee wore shoes from Gina and jewelery from her parents. Marcus and the groomsmen wore suits from Satch. The floral arrangements were by Floral Event.

We made the programs for the ceremony ourselves, with the help from our closest friends, my maid of honour and Marcus’ best man. We bought the paper from Kami in Fitzroy.” The rest of the stationery was done in black and white letterpress by Vince Printers and featured an oak tree as a nod to the ceremony location.

Ju Lee says “My dog made a special guest appearance, starting off the processional along with Marcus’ 5-year-old nephew. Followed by the flower girl, my bridesmaid and my maid of honour. They all walked in to ‘Ave Maria’ by Beyonce. I walked down the aisle to ‘I love NYE’ by Badly Drawn Boy. An instrumental song that I have always loved.

With the recessional, we picked ‘Love Today’ by Mika.”

A traditional tea ceremony with family members followed the wedding ceremony and photos.

Leftover paper from the handmade ceremony programs was turned into placecards for guests and hung on a wooden tree (as a nod to the oak tree ceremony location) from Hart & Heim. Ju Lee and Marcus named each table in relation to something to do with Venice- where Marcus proposed Amongst the table names were “Gelati”, “Grand Canal” and “San Marco”. For favors, Ju Lee says “I purchased 3D holographic glasses from 3DGlassesOnline which were given to our guests as wedding bombonnieres. When you put them on, look at any points of light to see little hearts!”

The wedding cake consisted of red velvet and black and white cupcakes made by Sugardeaux Cupcakes. One of Ju Lee’s favourite moments was the speeches “Speeches – from my father, maid of honour, best man and my brother (who also helped emcee at the reception). I loved all their speeches! My father mentioned that we had a lengthy trial period (12 years of dating) before tying the knot. The Best Man ended his speech with a special toast – a very loud ‘Yum seng’ which is tradition for every Chinese Malaysian wedding”

Of their first dance, Ju Lee says “I’ve known Marcus for over 12 years now and he never dances. So when it came to our first dance, I suggested dance lessons. He was not very keen at all, but finally he gave in. It was also the first time we learnt something together as a couple and it was a lot of fun. We had private lessons by Robbie from Dance Dynamics in Malvern. The first part of the dance was a rumba, we danced to ‘Lovin’ You’ (a version by the Bossa Project). The second part of the dance, we did a samba to Joss Stone’s ‘Super Duper Love’. On the wedding day itself, we were very nervous. But the dance turned out perfect and I am so proud of Marcus. He was so relieved after the dance!”

Thank you for sharing your beautiful wedding with us Ju Lee and Marcus! Congratulations on your marriage! Thank you also to Adrian of by Adrian Tuazon Photography for sending over today’s photographs! 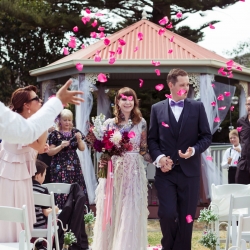